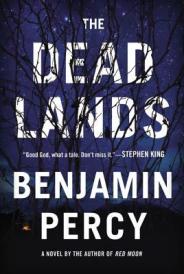 The post-apocalyptic novel, since 1978, has lived in the shadow of a titan – Stephen King’s The Stand. Benjamin Percy’s The Dead Lands is the first book that I’ve truly felt had temerity to pick up the gauntlet. I’ve been waiting for a book like this. It is a reinterpretation of the famous Lewis and Clark expedition in a post-apocalyptic United States, a United States that has been decimated by an epidemic and twisted by radiation. The land is crippled, broken and mutated. Creatures have evolved and changed. Hairless wolves, giant spiders and other nightmares stalk the boundaries of human settlements. Humanity cowers inside their walls. It is a compelling premise, and Percy packs an incredibly ambitious work of imagination into just under 400 pages.

“The world we know is gone, destroyed by a virus that wiped out nearly every human on the planet. Some few survivors built walled cities, fortresses to keep themselves safe from those the virus didn’t kill…but did change.

Sanctuary. A citadel in the heart of the former United States of America. Hundreds of miles in every direction beyond its walls lies nothing but death and devastation. Everyone who lives in the safety Sanctuary provides knows that.

Until the day a stranger appears. She speaks of a green and fertile land far to the west, a land of promise and plenty. Safe from the ruin the virus wreaked. She has come to lead the survivors away from Sanctuary, to the promise of a new life without walls.

But those who follow her will discover that not everything she says is true.”

Percy evokes a landscape that is ruinous, inhospitable and pitiless. We follow the trek of Lewis and Clark toward the verdant promise of the North Western United States, but we also keep tabs on Sanctuary and the events that transpire under the ministrations of the current Mayor. In a land of bloodthirsty hyper evolved predators the true threats and horrors, as they often do, come from people. The villains are worse than any nightmare creature stalking though the devastated and irradiated wild of the post-apocalyptic American wilderness.

Like most books of this style, the characters are the strength. The point of view characters vary between several protagonists, and several antagonists. The way Percy conceptualises and characterises them is similar to King’s treatment, with a clear demarcation of good and evil. This isn’t a criticism. I appreciate the clarity in characterisation. It doesn’t take away from the overarching plot, but the main characters are suitably conflicted and complicated enough to keep it interesting.

I feel that I should clarify this point, or risk oversimplification. While we know where we stand with each character, nobody’s hands are clean. There are plenty of skeletons in the closet, and plenty of dark moments following awful decisions. They all have flaws and they are all the more believable for it. Nothing turns me off a book more than a paragon; thankfully that is not the case here, but you are never in doubt about who the villains are. The moral aspirations of the characters, their ambitions and their hopes for the future, are what really clarify the dichotomy between good and evil. The choices they make, and their actions in pursuit of them, are all in service to these desires. I came to care about the core characters and relished the events in the latter half of the book when plotlines begin tying up and paying off.

I loved the world building and Percy’s ability to construct a scene in the wilderness. The idea that the whole ecology of the United States has been fundamentally altered through habitual radiation from bombsites and meltdowns, radiation that has sparked an evolutionary wildfire, is incredibly compelling. He has a whole host of nightmares out there in the dark, waiting for the intrepid explorer. His conception and execution of these creatures, along with the hints and suggestions of what else is out there, are suffused with mystery and a dark allure. This subject matter is deep, and begging for exploration.

If I had one criticism it would be that it all felt too brief. Percy’s world is so rich and full of promise that what I experienced simply didn’t feel like it was enough. Percy knows where he is taking the story, where it all ends up, and while I loved the destination, and the climax, I still wanted more of the journey. I’m being greedy here, but I’m unapologetic about it. I really just wanted more of the world, more exploration, more terrifying creatures of a wild, mutated and unchecked ecosystem. Not only that, I also cared for the characters; I wanted to see more, to see what becomes of them, and what comes next. Percy leaves the book in a ridiculously interesting place and I’m not sure whether to be angry about it or impressed.

If you love The Stand read this. If you love dystopian or post-apocalyptic fiction read this. If you want to experience a twisted and mutated post-nuclear America, then you would be remiss if you didn’t pick this book up. I’ve read two of Percy’s major releases now, and The Dead Lands is the best of the batch so far. I can’t wait for his next one.