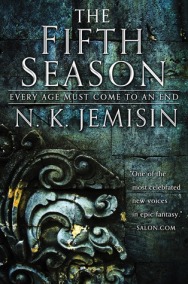 The Fifth Season by N.K. Jemisin, published by the ever awesome Orbit Books, won the Hugo award this year for best novel. Hype often repels me, I have been disappointed before, but the premise sounded great. So, with a mixture of anticipation and trepidation, I bought a copy and waded in.

So, straight into it. My impression? This book is wonderful. It is beautifully written, with a vivid but light and accessible style. It is utterly unpretentious, and fiercely intelligent. The characters are complex and multifaceted, the plot is compelling, the world building is rich, and the narration is unique and distinct. The magic system is excellent, far-reaching and rife with potential. There is a lot to love. One area that particularly impressed me was the narrative structure. The book mixes point of view characters. It staggers them in a way that is initially vague, but later incredibly significant. The end result is a master class in plotting, planning and structure. I have never said this about a book before, but I found it structurally compelling. There you go.

Firstly, the plot; the synopsis reads:

THIS IS THE WAY THE WORLD ENDS… FOR THE LAST TIME.

A season of endings has begun.

It starts with the great red rift across the heart of the world’s sole continent, spewing ash that blots out the sun.

It starts with death, with a murdered son and a missing daughter.

It starts with betrayal, and long dormant wounds rising up to fester.

This is the Stillness, a land long familiar with catastrophe, where the power of the earth is wielded as a weapon. And where there is no mercy.

The book is heavily concerned with the primal forces of the planet and geothermal power. They are personified in the deity of Father Earth. Father Earth created the conditions that proved necessary for life to spring forth, and for a while he loved humanity. Not anymore, though. Father Earth is pissed. So the planet and the continents and the tectonic plates shift, fault lines crack and quake, and super volcanoes have a tendency to spring up above hotspots throwing the world into chaos. It is a terrifyingly inhospitable world. All of these problems combine to threaten the risk of a Season. A Season is a protracted period of chaotic weather and harsh environmental conditions with the potential to end all life. (When earthquakes and super volcanoes aren’t bad enough.) The only thing that stands in the way of another season breaking out, and the key to survival for the empire, is a sect of people born with powers to harness and control the earth: The Orogenes. They are capable of subduing the restless earth, and they are reviled for it.

The world of The Fifth Season is a stratified class system. People are born into a caste, which defines the rest of their lives. It is suitably hopeless and depressing. The caste system covers the stratum from menial labour through to the leadership caste. An escape from this system exists should one be born with the powers of an Orogene, but it is more of a curse than a gift. They are hated, feared and some are lynched before the Guardians (The Leadership’s foil for the Orogene) come calling to collect them for training in their school called the Fulcrum. The conflict arising from their treatment is harrowing, and the close-minded bigotry throughout the book is terrible. Jemisin puts it all out there, at first, so in the early stages there isn’t exactly a clear demarcation of good and evil, but it soon becomes very clear who stands on which side.

One of the biggest surprises in this book, for me, was the use of second person narrative. Every reference I’ve ever seen to the second person narrative style can be summed up with DON’T DO THIS. That’s probably true for most, but you know what? Jemisin’s second person point of view works beautifully. It is so strikingly unique and unfamiliar that I was looking forward to coming back to it each and every time. The success of this is testament to Jemisin’s skill as a writer, and not the general viability of second person though. The book mixes this second person perspective with alternate views in traditional third person limited, and interweaves them. Each perspective becomes utterly unique through these shifts for the reader. I really enjoyed the contrasts.

The narratives not only differ in perspective, they are also temporally staggered. The characters in the book surround a central event, which shapes the before and after, charting the course of the book. This central event, the great red rift of the synopsis, ripples through time. Each characters importance and connection to it is explored and detailed, and the knowledge of what has happened, and what will happen, maintains a compelling sense of urgency and mystery. I loved how these displacements all contribute to the whole of the book. There are some incredible reveals and connections throughout that I found really entertaining and greatly rewarding. Every viewpoint left me wondering where, exactly, this perspective fit on the timeline, and compelled me to read on. Sure there are a lot of loose threads at this point, but as it’s the first book in a series, there has to be some mystery remaining. I felt the book wrapped up quite well considering that, and damn, was the last page ever painful. One boon of being a latecomer is that Obelisk Gate is already out so I’m spared a painful wait.

I strongly advise you give this book a try, if you haven’t already. It is utterly unique in the fantasy genre. I cannot bring to mind anything that hits the same notes as this one. It’s a very welcome and very well written breath of fresh air. The closest parallel that I can come up with is probably the Mistborn series by Brandon Sanderson. They treat with a lot of similar themes and ideas, and the conception of power including the magic system relate in certain respects, but really, even that comparison is tenuous. This style, with these themes, and the significance and complexity of the characters is vital for new writing in this genre. I wholeheartedly recommend this one.